Outside of the CAF’s General Assembly meeting on the 11th of June 2022, dozens of protesters reminded the Basque trainmaker of is obligation to respect human rights and terminate its business with Israel’s violent occupation of Jerusalem and apartheid regime.

By Richard Weyndling and Santiago González Vallejo from the “CAF: Get off the Apartheid Train” campaign. On Saturday the 11th of June 2022, CAF shareholders coming to the Basque trainmaker’s General Assembly meeting chose to enter by the back door of the company’s offices in Beasain (Basque country) rather than face demonstrators loudly objecting to CAF’s business with Israel’s illegal Israeli Jerusalem light rail project (JLR).

Inside the meeting hall, Santiago González, a CAF shareholder and campaigner of the Comité de Solidaridad con la Causa Árabe (CSCA), confronted  CAF’s Executive Committee with several questions. He said later on, “I told the participants in the meeting that the board had misinformed CAF’s investors because this Israeli light rail  project is not limited to West Jerusalem but extends into occupied Palestinian East Jerusalem. I clarified for the shareholder that the company is deeply  involved in violations of humanitarian law and human rights by constructing the new Blue Line which will extend to - and de facto annex -  Israel’s illegal settlements in and around occupied Palestinian Jerusalem.”

He also asked the Executive Committee whether the company would comply with the  recommendations issued recently by the OECD’s Spanish national contact point (NCP). The NCP had called on CAF to ensure due diligence, to verify  the information it has published about the JRL project, and to hire an independent expert to examine the company’s policy with regard to ensuring compliance with human rights. 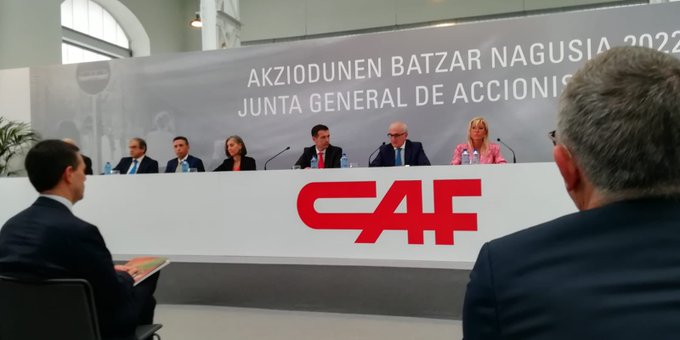 In his response, CAF president Andres Arizkorreta, however, insisted once more that none of CAF’s business activities would be implicated in serious violations of human rights. Although the CEO mentioned that they would study  the OECD NPC’s recommendations, he emphasized that CAF has no obligations to implement these non-mandatory recommendations.

Following their demonstration outside the company headquarters around 50 protesters, including a number of local residents and CAF employees, marched to the center of town and distributed leaflets to raise awareness about CAF’s complicity in Israel’s gross violations of Palestinian human rights among the people of Beasain where CAF is the principal employer.

Meanwhile,  solidarity organizations and trade unions from accross Europe  also urged CAF shareholders to end CAF’s complicity in Israel’s violent occupation of Jerusalem and Israel’s apartheid regime. Thousands of emails were sent to the representatives of major CAF shareholders, among them the Norwegian Norges Bank, the Spanish investment holding company Cartera Social and the Basque Kutxabank. A social media storm was carried out  in France where CAF has one of its factories.

A short look back on CAF’s complicity with Israel’s apartheid regime:

CAF, alongside the Israeli construction firm Shapir, is building and operating tramlines to connect West Jerusalem with illegal Israeli settlements in the occupied West Bank, a project which is an integral part of the ethnic cleansing and settler colonial strategy of the Israeli apartheid regime.

Shapir is already named in the UN Human Rights Council’s database of companies identified as profiting from Israel’s illegal settlement enterprise in the occupied Palestinian territorry.Since CAF meets all the criteria, it will most probably be named in the next update of this UN database.

A number of other well-known companies, such as Alstom, Siemens, Systra, Bombardier and Macquarie, withdrew from bidding for the JRL project in 2019, in some cases specifically citing concerns about its human rights implications.

Several NGOs as well as the European Legal Support Center have raised the alarm and explained to CAF that its business with the JRL contributes directly to the entrenchment of Israel’s illegal annexation of occupied East Jerusalem and to grave violations of  Palestinians’ fundamental human rights.

Popular opposition of CAF’s business with the JLR:

In 2019, before CAF was officially awarded the JLR contract, workers’ representatives at the principal CAF factories in Beasain and Irun issued a public statement urging the company to withdraw from the JLR tender. Nevertheless, the consortium led by CAF and Shapir was selected by Israel’s finance ministry to lead the JLR in August 2019.

In February 2020, Basque BDS activists launched the “CAF: Get off the Apartheid Train” campaign. The campaign has since taken on an international dimension: CAF has lost tenders and contracts in Mexico, Norway and the UK as a result of campaigns for its exclusion from public contracts due to its involvement in the illegal JLR project.

Campaigners have also raised CAF’s involvement in the JLR in several  parliaments, among others in the Basque autonomous region, whose government is a CAF shareholder, as well as in the Spanish and Navarran parliaments and the parliaments of Norway and the EU.

Despite the evident unwillingness of CAF to respect human rights and international humanitarian law, campaigners know that CAF is feeling the heat. Popular and growing international pressure will continue until CAF terminates its business with the JLR and gross human rights violations.