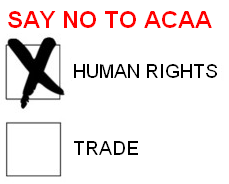 On September 18 the International Trade Committee of the European Parliament is set to vote on a new trade agreement with Israel.

On September 18 the International Trade Committee of the European Parliament is set to vote on a new trade agreement with Israel. If passed, the Agreement on Conformity Assessment and Acceptance of Industrial Products (ACAA) would remove barriers to trade between Israel and member states in industrial products, especially pharmaceuticals.

Such an agreement would strengthen EU-Israel relations and would reward Israel for its continued violations of international law.

The European Union claims to implement a policy of “positive engagement” with Israel. This policy has failed: despite numerous EU condemnations, Israel has continued its gross infringements of universal human rights with impunity. Israel’s settlements have expanded, the blockade on Gaza remains and new laws to discriminate against Palestinian citizens of Israel have been introduced.

Following the Gaza massacre of 2008-09, the EU vowed to not implement any further upgrades in EU-Israel relations. The implementation of the ACAA agreement would be a betrayal of this policy that will only encourage further Israeli violations of international law.

A concerted effort across Europe can still stop this agreement.

We're trying to collect 3,000 signatures on the general petition in English

Or you can sign the country-specific petitions that have been set up in Spain; Poland; Germany, Italy; France; Belgique and België.

2. Write to your MEPs and ask them to tell the international trade committee to vote against ACAA

3. Write letters and articles for publication online and in newspapers

4. Distribute this call for action through your networks