SodaStream: is BDS hitting where it hurts?

October 11, 2014
/ By
Doug Henwood for Mondoweiss
/
This morning, the Israeli-based fizz merchant SodaStream announced miserable preliminary financial results for the quarter ending September 30. Its stock promptly fell by over 20%, compounding losses over the last year.

This morning, the Israeli-based fizz merchant SodaStream announced miserable preliminary financial results for the quarter ending September 30. Its stock promptly fell by over 20%, compounding losses over the last year. It’s now more than 70% off its all-time high set in July 2011, and the company may well put itself up for sale. 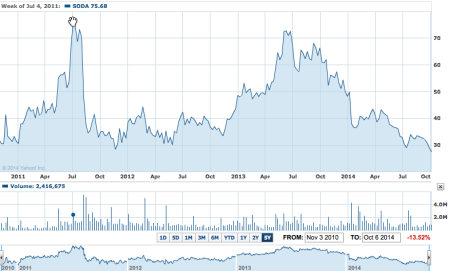 The company’s explanation of the glum performance was not much of an explanation at all. From their official release:

“We are very disappointed in our recent performance,” said Daniel Birnbaum, Chief Executive Officer of SodaStream. “Our U.S. business underperformed due to lower than expected demand for our soda makers and flavors which was the primary driver of the overall shortfall in the third quarter. While we were successful over the last few years in establishing a solid base of repeat users in the U.S., we have not succeeded in attracting new consumers to our home carbonation system at the rate we believe should be achieved. The third quarter results are a clear indication that we must alter our course and improve our execution across the board. We have already begun a strategic shift of the SodaStream brand towards health & wellness, primarily in the U.S., where we believe this message will resonate more strongly with consumers….”

In other words, sales were off because not enough people are buying the product.

Media reports (like this one) glossed the company’s explanation with the commonplace that Americans are losing their taste for soda. But SodaStream’s fizz-inducing system’s could be used to make bubbly water (0 calories) or effervescent fruit juices. You could probably even gas up your kale juice if you wanted to, which is beyond my imagining. According to the company’s nutrition information page, its flavors have about a third the calories of comparable sodas like Coke and Sprite. So if Americans are really losing their taste for the really sweet stuff, SodaStream should already be well-positioned as a possible alternative, not a victim of these changing preferences.

Not mentioned in either the company’s release or any news report I’ve seen: the global boycott of Israeli products. SodaStream is especially vulnerable, compared to a company based in Israel itself, because its major factory is in the West Bank settlement of Ma’ale Adumim. SodaStream has factories in Israel proper and elsewhere in the world, but its presence in the Occupied Territories make it particularly vulnerable to a boycott, a risk the company acknowledged in its most recent annual report.

Earlier in the year, Scarlett Johansson was relieved of her role as her role as an “ambassador” for Oxfam, because the charity believed “that businesses that operate in settlements further the ongoing poverty and denial of rights of the Palestinian communities that we work to support.” That move attracted global attention. It may be that Johansson’s star power did more to publicize the boycott than it did the company’s products.

So is the Boycott, Divestment, Sanctions (BDS) movement against Israel costing a real-world company real money? SodaStream isn’t talking; a query to the firm’s publicist has gone unanswered, which is unusual behavior for a publicist who wants to talk. But it’s looking like the answer may well be yes.