Why is the United Nations doing business with G4S, notorious prison supplier?

October 5, 2014
/ By
Kali Rubaii for Friends of Sabeel—North America
/
An Open Letter to United Nations Secretary General Ban Ki-moon: In early September, I accompanied an Iraqi friend to the United Nations High Commissioner for Refugees office in Amman, Jordan to help register him officially as a refugee. It was a bittersweet day: my friend had reached safety, but he was now registering as a stateless person.

In early September, I accompanied an Iraqi friend to the United Nations High Commissioner for Refugees office in Amman, Jordan to help register him officially as a refugee. It was a bittersweet day: my friend had reached safety, but he was now registering as a stateless person. I trusted in the United Nations, particularly because of its solid stance against the occupation of Palestine and other human rights abuses, to protect the basic rights of my friend, a journalist, and his family: his young wife and their two delightful children.

Then I noticed something strange: there was a G4S logo on the gate attendant’s shirt. Because of my research on G4S for Friends of Sabeel—North America, I went on alert. I counted still more of the logos on the security cameras. With amazement, I began to realize that G4S was not only offering security for the United Nations office– G4S was also offering an usher-like service, moving people through lines, asking them to show IDs, and operating the entire interface between the UNHCR and the outside world. 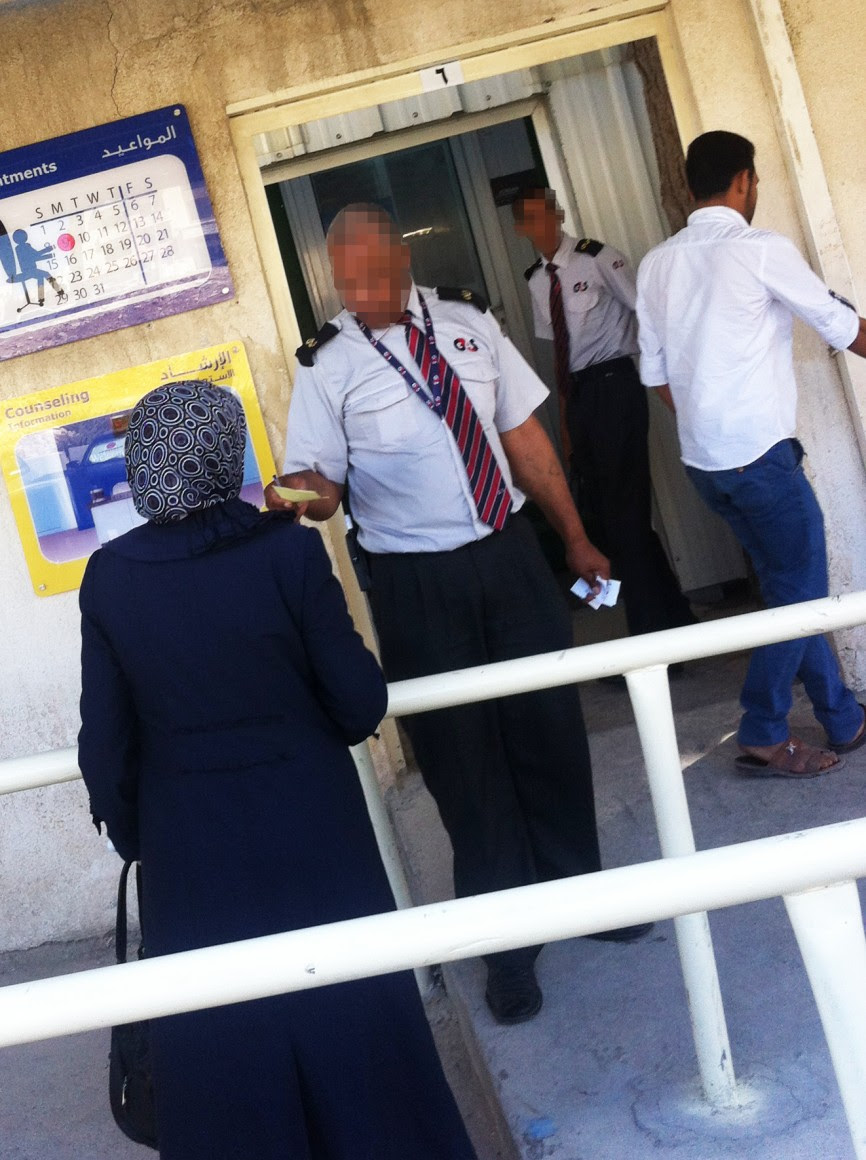 Later, when I was walking to my home in another neighborhood of Amman, I saw two G4S security guards chatting in front of a nondescript building.

“What is this building?” I asked the guards. “UNDP” was the reply–the United Nations Development Program.

I soon asked a friend working in the United Nations what was going on, and was told that G4S does security at the Syrian refugee camps in Zaatari and Asraq, in Jordan, as well.

I’m shocked that the United Nations has contracts(pdf)with G4S services.

For those who don’t know, G4S is a British-based multinational security company notorious for supplying Israeli prisons with services and equipment, most notably prisons like Ofer that hold Palestinian children under military detention, often without charge and for lengthy periods.

It is a major contradiction– and frankly and embarrassment– that the United Nations, with its solid stance against the Israeli occupation of Palestine and the generally commendable work the UN does, would contract with a company participating in violating the very protections the UN offers all people.

The terror and abuse suffered by Palestinian children in Israeli prisons has been well documented (pdf) by numerous organizations working for their protection. They do not receive the same rights as Israeli children. They may be held in solitary confinement, kicked, punched, stripped naked and forced to sign “confessions” for throwing stones at armored vehicles that are invading the children’s own land. They may be held without charge for long periods. They are political prisoners trained at a young age to fear the occupying power and to remain cowed by it.

Recently, G4S itself announced that it will end its Israeli prison contracts, mainly due to pressure from human rights groups.

In order to sustain its reputation and moral authority, it is urgent that the United Nations cooperate with the international human rights movement against the Israeli occupation of Palestine by agreeing not to renew any contracts with G4S.  Now, this very moment.