Greenwashing is a marketing spin that is used by countries and corporations to deceptively promote themselves as climate friendly to cover up the fact that their policies and practices in reality cause substantial environmental harm. Consequently, greenwashing exacerbates the climate emergency as well as social and ecological injustices.

States that have promoted racist regimes, colonialism and imperialist wars are unsurprisingly also countries that have historically contributed most to the climate crisis we are experiencing, chiefly the US and major European states. The climate emergency disproportionately affects indigenous peoples, the Global South and oppressed communities everywhere.

Israel, like its main sponsors, the US, UK and the EU, uses greenwashing to promote a climate-friendly image to distract attention from its decades-old regime of military occupation, settler-colonialism and apartheid. Aside from this regime’s violent ethnic cleansing of Indigenous Palestinians and destruction of lives and livelihoods, it has also systematically devastated the fauna and flora of historical Palestine.

The catastrophic climate crisis is fueled by global inequality and engineered by complicit governments and corporations that put profit before people and planet. Everywhere, the least powerful are the most affected.
Indigenous Palestinians living under Israeli occupation and apartheid, with no control over our land or natural resources, are highly vulnerable to the climate crisis. With Israel monopolizing resources, rising temperatures are exacerbating desertification, water and land scarcity, and climate apartheid. 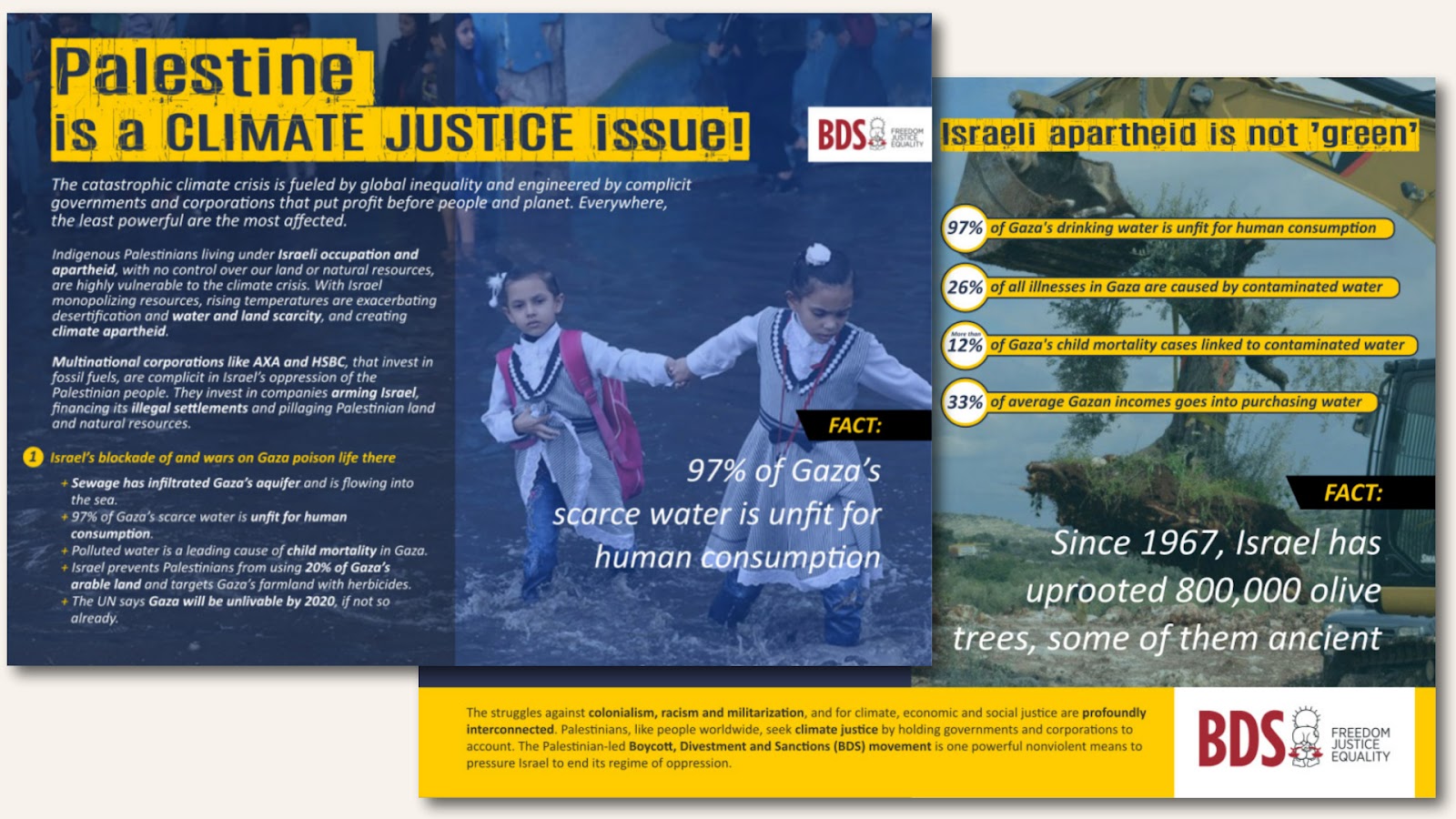 The Jewish National Fund (JNF), created in 1901 as an instrument for the Zionist colonisation of historical Palestine, holds 13% of the lands belonging to Palestinian refugees expelled during the 1948 Nakba. It serves on the Israel Land Council which administers 93% of the land under Israel’s control in its pre-1067 borders. There it has planted millions of non-native tree species and invasive plants, causing enormous harm to biodiversity. JNF forests are mainly designed to hide the ruins of ethnically cleansed Palestinian villages.

Israel is pillaging vast gas reserves in Gaza’s Exclusive Economic Zone for export. Methane is the primary component of natural gas and is 84 times more powerful than carbon dioxide. Israel, alongside fossil fuel corporations, is greenwashing gas as a “transition fuel”. Key greenwashing projects promoted by Israel are the EU-sponsored EastMed pipeline, to transport Israel’s pillaged and disputed gas to Europe, as well as the EuroAsia Interconnector for the sale of Israel’s fossil gas-based electricity that will benefit its illegal settlements. These projects, which fuel Israel’s system of settler-colonialism and apartheid and undermine the Paris Climate Agreement, further implicate the EU in Israel’s grave human rights violations and environmental destruction.

The Israeli government, agribusinesses and water companies play a key role in Israel’s destruction of the environment and Palestinian agriculture, the dispossession of Palestinian farmers, and land grabs to strengthen Israel’s illegal settlement enterprise.

Haifa Chemicals is a private Israeli multinational supplier of fertilizers. Netafim is an Israel-based irrigation technology company, acquired in 2018 by Mexican firm Mexichem, while 20% of its shares are still held by Kibbutz Hatzerim where it was founded. Mekorot is the Israeli state-owned water company stealing water from Palestinian aquifers. Israeli water companies are an integral part of what a French parliamentary report has condemned as Israel’s “water apartheid”. Mekorot is listed in the UN database of companies implicated in Israel’s settlement enterprise, which constitutes a war crime under international law.

These entities are complicit in Israel’s regime of settler colonialism, apartheid and occupation. They promote their technology abroad with racist ideas such as Israel’s foundational myth of “making the desert bloom”. They create dependency among farming communities by tying production decisions and profits to contracts, especially in the Global South, thus destroying sustainable farming models. In 2016, in the Brazilian province of Bahia, two water utility companies, Embasa and CERB, ended their cooperation agreement with Mekorot following a civil society campaign. The campaign highlighted Israel’s water apartheid, carried out by state agencies like Mekorot, and mobilized behind the slogan, “From Bahia to Palestine, we thirst for justice”.

All India Kisan Sabha calls for boycott of Netafim

In 2018, All India Kisan Sabha (AIKS), India’s largest farmers union with over 16 million members, took the decision to boycott products of Israeli company Netafim and committed to work towards its exclusion from government schemes. In 2017, the union had endorsed the BDS call.

In March 2021, following a sustained campaign by Independent Jewish Voices Canada (IJV) to have JNF Canada’s charitable status revoked, JNF Canada was forced to distance itself from JNF-KKL (Keren Kayemeth LeIsrael) in historic Palestine. They stated they will not “fund projects in the disputed territories” following instructions from Canada Revenue Agency.

Oppose mega-projects such as the EastMed gas pipeline and the EuroAsia Interconnector that contribute to the climate emergency and foster Israeli apartheid. Gas is a fossil fuel that should remain in the ground! Encourage divestment from HeidelbergCement, which has illegal quarries in the occupied West Bank, enabling and profiting from Israel’s criminal pillage of Palestinian natural resources. Palestinians should have the ultimate control over these resources.

Israeli companies like Netafim, Mekorot, Haifa Chemicals and others greenwash their complicity with Israel’s apartheid by entering into agribusiness contracts and tie-ups with governments. Campaign with local groups to end these ties, which cover up Israel’s apartheid against Palestinians and enforce unsustainable and exploitative models of agriculture elsewhere.

Organize popular boycott and divestment campaigns against agritech products from complicit Israeli companies, like Netafim and Haifa Chemicals, that are implicated in Israel’s regime of apartheid and settler colonialism. Farmer unions and cooperatives especially can lead such efforts to encourage their members to endorse such boycotts.

Campaigners have successfully persuaded shops and supermarkets to deshelve products from Israel’s illegal settlements. This includes many agricultural products, such as dates, wine and other common consumer items that are produced in settlements but falsely marked as ‘Made in Israel’. Stores can be encouraged to end import of such products and ties with settlement companies.

Join the ongoing efforts to expose the JNF’s criminal responsibility for ethnic cleansing, illegal settlements and apartheid against the Indigenous Palestinian people. Revoke its charitable status and challenge the legitimacy it garners through institutional recognition. Palestinian grassroots as well as solidarity groups are challenging JNF’s participation in climate summits and other international fora. More on how to join the campaign: stopthejnf.org